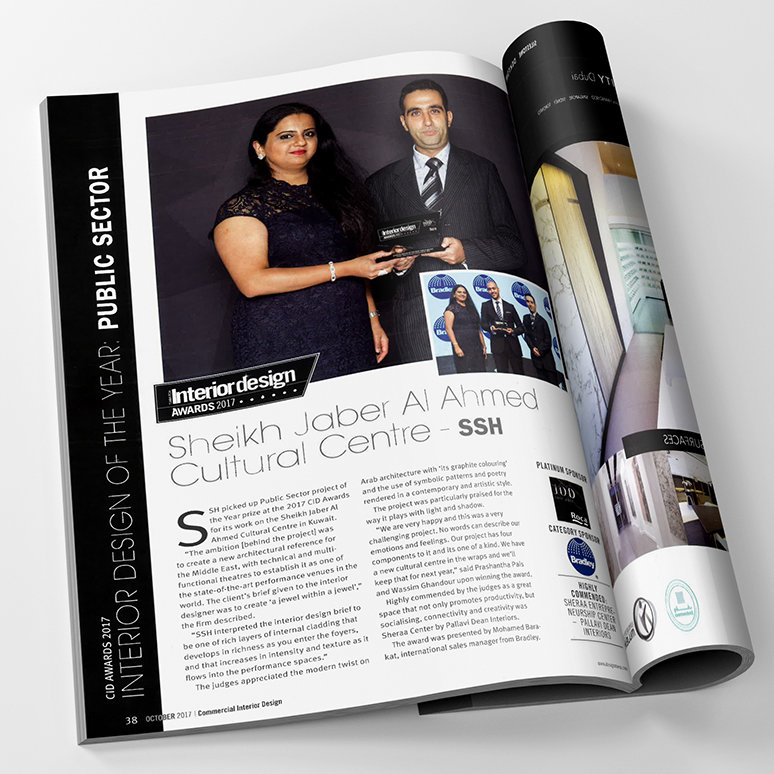 The CID Awards pay tribute to the projects, interior design firms and designers making their mark on the region’s interior design industry, and herald work that displays original thinking, creative breadth and a willingness to stray from tried and tested formulas.

The award judges “appreciated this modern twist on Arab architecture, with its graphite colouring and the use of symbolic patterns and poetry in a contemporary and artistic way. The project was particularly praised for the way it plays with light and shadow.”

Winning its category at this year’s CID Awards event follows the success of the JACC complex also being celebrated as Best Public Service Architecture and Public Service Interior at the Africa & Arabia Property Awards, and winning the Award of Merit at ENR’s Global Best Projects Awards.

Since opening in November 2016, the complex has played host to performing arts, local performances and international acts. The facility is the centrepiece of a world-class theatre quarter.

Complex geometric shapes, inspired by Islamic architecture, form the richly textured outer skin of the four buildings that make up JACC, which sit like jewels within a large national Park for Kuwait. The wonders continue inside each building, with visitors discovering jewels within jewels, as they explore the beautifully designed interiors.

A major interior feature at the complex is a monolithic signature chandelier that illuminates the entrance foyer to the National Theatre and spans between the outer walls of the National Theatre and Drama Theatre. Drawing an analogy between glass and water, the fixture presents itself in a tiered array of falling glass to evoke the impression of a giant indoor waterfall that visitors can walk around, pass under or walk behind at balcony levels.

Another talking point is decorative calligraphy, spread over 8,000 sqm across the four building’s pavilions and designed into the cladding of the theatres, concert halls and libraries. Seven stanzas taken from the Kuwaiti Amir’s own sayings promoting culture and development were selected by the Amiri Diwan for each calligraphic installation.

SSH was appointed as lead architecture, interior design and engineering designer on the complex.

Find out more about CID Awards here and here.